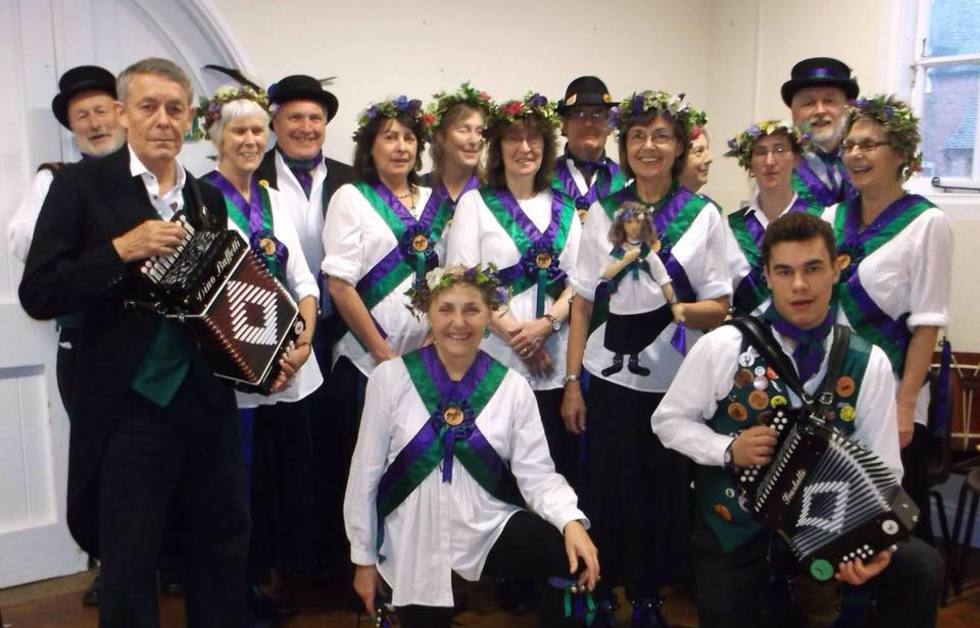 You will find our most recent photos in our facebook albums. Plus you can find a selection of videos and photos from our past outings below. This archive is still under construction. Keep checking to see the latest additions

Click on the title opposite to see the photo archive.

We are grateful to everyone who provides us with photos for our website and acknowledge you all. However particular thanks go to Robert and Micky and Morris widower Vince.

Charlotte and Toby's Wedding, May 2017

The Hungerford Wassail 2020, featuring the GGs

The Rickshaw Challenge 2018, featuing the GGs

Riding the Carousel at Millets Farm 2012

The Gallopers performed at Hungerford's first Wassail at the Cider Barn in Hungerford in January 2020. As well as celebratory dancing by the Gallopers the new year was welcomed by the Constable of The Town & Manor of Hungerford & Liberty of Sanden Fee. The traditional festival blessed the apple trees and welcomed them from their winter slumber with toast hanging from the trees and the eating of Wassail cake and drinking from the Wassail cup.

The Gallopers, including Pudsey's Morris Dancing Cousin had a great day dancing for and supporting the BBC Children in Need charity when the Rickshaw Challenge passed by locally in Kintbury and Froxfield.

This was our first overseas gig and what an event it was!

We were delighted to be representing England at this 43rd music, dance and craft festival in Hollain, Belgium. Every year this event in a small village in the South of Belgium hosts a different country to share their dance traditions. We were honoured to be one of only four groups from England to represent their first ever UK guests, together with new friends Earlsdon Morris and Coventry Mummers from Coventry and our old friends Ridgeway Step Clog from Oxfordshire.

This was a weekend of sharing dance and music traditions with Walloon and Midlands culture. in the the most incredibly hospitable atmosphere. There was much dancing, music and joy fuelled by good food and naturally beer!

Charlotte and Toby's Wedding, May 2017

Much fun was had by all at Charlotte and Toby's Wedding at Pitt Hall Barn. Photos courtesy of Nichola, the bride's mother.

This festival has been on our schedule for several years now and as it is one of the earliest in the season it has "variable" weather!! This year was lovely and we had a great time with many of our favourite sides.

We spent a day dancing with many other Morris sides at some unusual venues around the island including the Isle of Wight Zoo!!!

We spent a memorable afternoon at a busy Millets Farm Centre on 12th August. We danced two sets outside the craft centre, building quite a crowd and raising funds for Children in Need